No Enthusiasm for Hillary? Tell These Millennial Women

A recent Pew Research study shows that for the first time, millennials have overtaken baby boomers as the nation’s largest living generation. We are now a more impactful voting demographic than the baby boomers, which means if you are reading this and haven’t yet registered to vote, go do it now!

When articles and polls paint this generalized view of Hillary as someone out of touch with young people, they fail to speak to us as individuals. We are a large demographic, and that’s why you can’t put us in a box.

I’ll start with myself. As a millennial woman, I strongly support Hillary Clinton because of her unwavering and consistent support for women’s access to reproductive healthcare. To me, she represents a politician who is able to bring visibility to women’s issues in a way that no other candidate can.

But don’t just take my word for it. I had the chance to talk to a few other millennials about Hillary Clinton and get their view.

Hannah Lindow is president of the Wellesley Students for Hillary group at Wellesley College, Hillary’s alma mater. They hold events on campus and in New Hampshire, talking with people about Hillary’s candidacy. Like other millennials, Lindow cares deeply about issues of inequality, particularly gender and how that intersects with other systems of oppression. She is also particularly interested in how the policy-making process affects inequality, she told me in an email.

“I love that she incorporated proposals to combat autism, Alzheimer’s and drug addiction into her platform after she heard these issues come up in town halls in Iowa and New Hampshire,” she said. “I also really appreciate that she weighed in on the water crisis in Flint in my home state of Michigan. That responsiveness, that willingness to listen to and learn from the American people is something I deeply admire in her.”

Exciting enough for you yet?

She also tells me it is a false dichotomy that Bernie Sanders is the “changemaker” while Hillary is merely the status quo.

“I find it frustrating that women have been made to feel that caring about female representation in our nation’s highest office is a shallow consideration that should not be factored into our decision-making. The campaign’s riff of, ‘for the daughters who dream that someday she can be President’ gives me a combination of goosebumps and tears every time,” she said.

She’s not the only one. Rini Sampath is student body president at the University of Southern California and cares deeply about gun violence, college affordability and reproductive issues. Her support for Hillary wasn’t always a given.

“In the early days of the election, I was an undecided voter. I read and listened carefully to Sen. Sanders’s statements,” she said. “I even attended his rally in Los Angeles to learn more about the candidate. At one point, I remember vocalizing my excitement for him to friends. I still feel proud knowing our Democratic Party is full of people who care about our country and care about all of our country’s people. But, after following both campaigns, and seeing Secretary Clinton’s remarkable debate skills, the details of policy proposals and her campaign’s ability to spotlight my AAPI community, I knew my vote would go to her.”

As a woman of color and a millennial, Rini said the opportunity to meet Clinton and see the diversity in her campaign left a great impression on her.

Jaclyn Munson is a first-year law student at Northeastern University and a feminist blogger who is passionate about women’s reproductive rights. She sees Hillary Clinton as the candidate most qualified to continue the protections President Obama has created for LGBT communities and minorities.

“As a millennial feminist, one of the main issues that’s important to me is reproductive justice. I’m excited about candidates who have a long history of supporting women’s access to safe and legal reproductive healthcare and Secretary Clinton is that candidate,” she said.

Clinton’s record of being a champion for people speaks loud and clear to millennials, and that’s what should be exciting.

It’s not just women who see this. Ari Ruiz, 25, is the President of the Stonewall Young Democrats, a California-based organization which mobilizes LGBT activists within the Democratic Party.

As a Latino member of the gay community, as well as a millennial, Ruiz’s view of electing Hillary Clinton is important for a different reason.

He says he’s not necessarily looking for an “exciting” candidate, but one who can govern.

As for Jill Abramson’s claim that students and millennials are not getting fired up the way the nation did in 2008 for electing our first black president, Ruiz has a great response for that.

“President Obama ignited a lot of excitement about his race in the idea of hope and change. The fact that he chose Hillary Clinton to be part of his administration tells you a lot.” he said. “I think Bernie is a good guy but I want someone who can get things done and for me, that’s HRC!”

The media have the power to spin, report and influence. When they are doing all three at the same time, that’s not good news. As a millennial who works in the media, I want to influence and encourage my generation to make the right choices based on substance, fact and values. 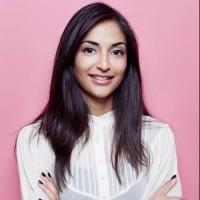 By Running as a Democrat, Bernie Is Making an Undeniable Case for Hillary
Next